Menu
Log in
Register
Navigation
Install the app
More options
Change style
Close Menu
You are using an out of date browser. It may not display this or other websites correctly.
You should upgrade or use an alternative browser.

Dog shot: Why Lachlan Lewis had a score to settle with Cody Walker

Welcome to The Dog Squad Forums

Signup for FREE and join the community today!

Lachlan Lewis had not forgotten Cody Walker’s stray elbow to the back of Canterbury teammate Nick Meaney’s head earlier this year, which prompted his bizarre half-time reaction on Sunday night.

And the Herald can reveal the matter did not end there, with the Bulldogs left unimpressed when Walker appeared to collect Meaney in the head midway through the second half of South Sydney’s 32-24 win.

Souths winger Taane Milne put through a kick, and Walker raced through and collected Meaney with his right arm. The Canterbury fullback stayed on the ground before being treated by a trainer. The matter was not penalised nor cited by the match review committee.
Lewis was charged with contrary conduct by the match review committee for dragging Walker to the ground before a melee erupted as the players walked off the field at half-time.

The halfback will not miss any games and can escape with just a $1600 fine with an early guilty plea.
He later apologised for his actions - Souths scored eight points while he was in the sin-bin - but maintained he wanted to stand up for Meaney. 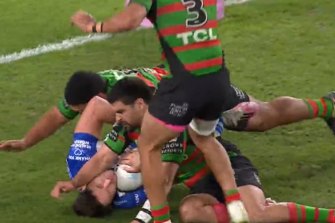 This incident in the 57th minute did not impress some at the Bulldogs.

Meaney had stopped Walker from scoring in the final play of the half, and Lewis could not help himself get in the face of the Souths No.6.
Lewis has had several running verbal battles with Souths, and was famously involved in a Good Friday duel with heavyweight Sam Burgess a couple of years ago.

Busted Bulldog Christian Crichton, who was given ballboy duties at Cbus Stadium, complete with a face mask, was also spotted getting involved in the melee - he had to be dragged back by Souths hooker Damien Cook - but escaped any sanction because half-time had already been blown, and he was already with his teammates coming from the field.
Players acting as ballboys will be reminded not to get involved in on-field team celebrations, which happened on Sunday when Latrell Mitchell joined in the festivities after Milne’s opening try. 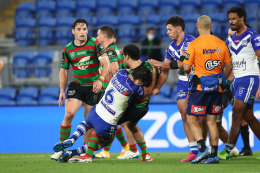 Souths and Canterbury players are staying at the same hotel on the Gold Coast.
NRL head of football Graham Annesley would not comment directly on the incident, but said it was “unusual” and “something I’ve never seen before”.

“To what was involved and what motivated it or sparked it, and whether there is any evidence Lachlan might like to give if he decides to defend the charge, that is a matter for him and the club,” Annesely said.
Canterbury coach Trent Barrett said after the game it was “completely out of character” for Lewis, and was not entirely sure after the game why he was binned when he never threw a punch. 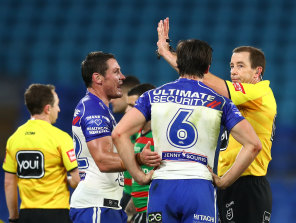 Lachlan Lewis is given ten minutes in the bin.CREDIT:GETTY

“I didn’t know you could get 10 minutes in the sin bin when play has been stopped and you are walking off at halftime ... he didn’t hit him or anything,” Barrett said.
Referees, however, have the power to give players a short spell if they believe a player has acted contrary to the laws of the game.

Lewis is expected to be retained for Canterbury’s clash against Cronulla on Sunday. The off-contract left-footer who has two rival Sydney clubs express an interest in his services for next year has kept Kyle Flanagan out of the side.

And with no reserve-grade competition, Flanagan’s first-grade exodus could continue for a few weeks yet.

Meanwhile, Alex Johnston, whose try-scoring double took him to 24 for the season, and looks a certainty to win a second Ken Irvine Medal, will be sidelined at least a month with a hamstring injury, paving the way for Jaxson Paulo or Josh Mansour to return.

Yeah and it is an ongoing saga it seems.
The Dog Squad | The newest and friendliest Bulldogs Community Fan Site
Don't forget to check out our frontpage: https://thedogsquad.co/

Somebody pointed out that it's always against small white guys.. and it seems that way.. if it was the other way around something would be done about it.. the NRL need to step in because he is a "role model" for young aboriginals

So Walker is racist?

Nathan Higgins said:
So Walker is racist?
Click to expand...

Walker has a chip on his shoulder against most players. Blokes needs to be ironed out ala David Fa'alogo and Braith Anasta.
The Dog Squad | The newest and friendliest Bulldogs Community Fan Site
Don't forget to check out our frontpage: https://thedogsquad.co/
You must log in or register to reply here.
Share:
Facebook Twitter Email Share Link
Top